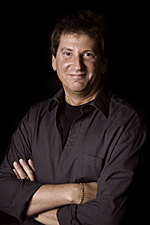 Jeff Ferst paints "geometrical landscapes", essentially abstract canvases combining blocks of vivid color and curvlinear forms, out of which emerge elements of nature, buildings and the human form. Ferst's paintings are energetic and celebratory, tactile and visual, grounded in reality and musical in feeling.

Ferst was born in the Bronx in New York City in 1955. As a child, he was involved in drawing and painting, and through his mother he was exposed to art in New York's museums. Ferst went on to major in printmaking (specializing in serigraphs) at New York University, graduating in 1976. One of his printmaking instructors at NYU was also a textile designer, and while in school Ferst produced wall hangings of printed fabric, and created a series of portraits with stuffed fabric on canvas, which he sold through a New York gallery.

From his college days, a group of artists have remained important to Ferst, starting with the Impressionists, for their focus on intense color relationships. In Kandinsky and Klee, he found artists who combined an imaginative approach to abstraction with an inventive and personal feeling for color. In Cubism, Ferst discovered a model for the activated division of space, which he continues to explore in his current work.

After college, Ferst traveled around Europe and the U.S., eventually settling in Canada in 1978, where he has lived ever since. After running a food company and working in furniture design, he started producing a series of realistically painted still lifes and landscapes. These early works, while traditional in subject matter, had a contemporary edge and the vibrant palette that was to mark Ferst's later paintings. In this period, he was exhibiting his work primarily in galleries in Ontario.

In 2005, Ferst experienced a personal and artistic turning point. He survived an episode of Sudden Cardiac Death, and after emerging from the trauma began to paint again. But the work that emerged was new to Ferst, completely abstract paintings with vibrant squares of color. The process of making this emerging work was, in the artist's words, "natural and effortless." These painting have continued to evolve over the next five years, becoming dense with curving arcs and interlocking forms. Faces and bodies, trees and animals, all became visible in the work. Recently, Ferst has been combining multiple panels to create a single painting. The paintings vibrate with color, creating a moving and joyful visual experience, described in 2008 as "flagrantly flamboyant" by Tara Tassone in the Preston Catalogue.

Ferst has shown his painting in exhibitions at Art Mode in Ottawa, and Calgary, at the Saint John Art Center, Saint John, New Brunswick, and at many other venues. The artist lives and works in Cambridge, Ontario, Canada.