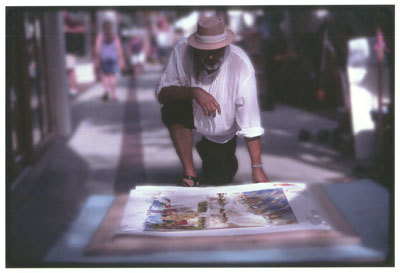 The oldest of nine children, Jim Holehouse was born in the town of Coshocton, Ohio in 1950. Although interested in fine arts from a young age, he decided to pursue an education in engineering, and later attended the University of Cincinnati. During the grueling winters, Jim had a vision of sunshine, palm covered beaches, and tropical winds. The time had come to leave the Midwest behind.

Jim relocated his life to south Florida, where he attended the Gold Coast sailing school, and then began teaching sailing. As a result, he wound up chartering many trips to the Caribbean and South America. It was during this time that he began an endless fascination with the tropical destinations, the sea, and surrounding architecture. He began working in the watercolor medium, attempting to capture the vivid color, emotion, and spontaneity of the tropics.

All who are familiar with Jim's work will attest that he has indeed captured that feeling in nearly thirty years of original works. By 1976, Jim and his brothers John and Tom had founded Tropic Art Design in Orlando, FL. Since its inception, Tropic Art has grown to be a fixture in the central Florida art community, one of very few must-see galleries in the area. Jim's work has been sold and collected for nearly thirty years from tropical art aficionados all over the world, and the value of the paintings from this master watercolor artist has consistently increased each year.